"I can’t help but think that creativity requires both constructive and destructive forces to make it really work."

Over the last couple of years, Aberration Nation has convinced readers that life sucks ... and that it sucks the life out of us.  It may seem sad but many years ago, I decided to embrace the concept and simply accept that regardless of how my life is defined (e.g., single, married, working, out of work, homeowner, apartment dweller, parent, full, empty), it will carry a touch of suckage.  There's no magical situation that will dissipate the sinking realization that everything wonderful, right, and spectacular eventually ends, including life itself.

So what we do with all that crappy reality continuously banging at the door?  Well, I could be wrong, but I believe that many highly creative folks bust open the lock and welcome it in, knowing that real life offers wealth that goes beyond rainbows, roses, and pots of gold. Yes, this best kept secret spinning down through the ages continuously offering up riches could be more earth-shattering than the power of positive thinking. Sorry Rhonda Byrne. It's simply called creativity.

In this week's edition of Newsweek, Po Bronson and Ashley Merryman tell us that creativity requires divergent thinking (generating many unique ideas) and then convergent thinking (combining those ideas into the best result).  In their fascinating article, The Creativity Crisis, they also note that highly creative people are very good at marshaling their brains into bilateral mode, and that the more creative they are, the more they dual-activate. In 2008, I wrote about my own right brain / left brain partnership in my blog post, Left, Right, Left, Right, Left.

Like many of the artists, writers, musicians, etc, whom I've interviewed, my guest today, writer and art critic Hrag Vartanian seems to recognize beauty in the unshielded cornucopia of life.  He knows that it ultimately reflects the larger human condition, which in the end is nothing but truth--real truth that doesn't sugar coat, mask, or mislead us into believing we are more than exactly what we see in each other.

In the end, we're all made of the same juicy constructive and destructive stuff whether we live in the ghetto or the White House; in a studio apartment in New York or on a farm; in the middle of Hollywood or the suburbs. After all, without a shared and honest full range of knowledge, emotion, and insight, how can an individual expect to produce anything of lasting value within ourselves and for the human race? Over time, culture changes but that kernel of humanity remains steadfast in its endless march toward the final reality of death. It's our glorious and tragic shared humanity that we recognize when we gaze upon, read, or listen to our greatest works of art--the ones that remain relevant for all time.

Hrag often says he's allergic to anything other than New York City. In some parts of America, the Big Apple is considered one of our nation's sin cities.  Yet its left-right-brain-diverging-converging environment coupled with constant blasts of hustle and bustle, good and evil, and a million constantly evolving stories has given birth to unparalleled levels of creativity.

Newsweek warns that we're failing to foster creativity in our children while other nation's efforts are surging. I can't help but wonder if it's in part due to decades of working so hard to create a collective environment of smoothed over loveliness. Many creatives know that lasting achievement comes from embracing both the yen and the yang, good and evil, constructive and destructive because embracing it all ultimately bring more to the golden converging brain table. Perhaps if more of us were comfortable enough to finally rub off the sugar and throw down our masks, we could collectively rise out of our education system, corporate American, ghettos, energy and penal systems, finance, politics, and suburbs to create something worthwhile and sustainable for our children.

I just wish certain people would stop asking us to please think outside the box ... as long as we stay within the boundaries of the larger box they've handed us.  Perhaps then more folks Hrag (and me) wouldn't have to suffer from so many allergies.

What's your story? Are you surprised by where you are or did you always see it coming?

I’m an Armenian Canadian writer who lives in Brooklyn, is gay married to an Armenian American and I should mention I was born in Aleppo, Syria — since people usually have preconceived notions about what that means. Am I surprised? Always, every day and that’s a great thing.

With regard to your current creative focus, was there an "ah-ha" moment you can tell us about?

That’s a funny question because I love asking other people that same question. Well, the funny thing is that tragedy often serves as an “ah-ha” moment for me. It is often a source of inspiration. So I have to say that my most recent “ah-ha” moment was the summer of 2009 when my then 92-year-old friend was hospitalized. Even though there was a great disparity in our ages, we shared many lovely moments together and I used to visit him once every month or two for the last 8 or 9 years. When he became ill I was reminded how short life was. He had many regrets in his life and I didn’t want to feel the same way. His illness made me realize I had to focus my creativity and it pushed me to launch Hyperallergic.com. Tragic moments often generate bursts of creativity for me. I don’t know if that is same for others, but it certainly is for me.

For you, is writing and art more about creation or expression? It could be both, but does one dominate with regard to your need/urge/desire to be a writer?

The decision to be a writer was an easy one. What to write about was much harder. I think people forget how much writing is an act of creation, even nonfiction writing. Writing is about forging narratives and I feel the pressure of fashioning new narratives everyday, which can be tortuous. The advantage of blogging — which I love to do — is that you don’t always have to create a new narrative but you get to continue them over days, weeks, months or even years. When I get to play with established narratives it becomes more fun for me. When I don’t have to worry about the “narrative” it feels more like a form of expression.

Do you believe that a highly creative person can give more than one art form 100% of their ability/soul (i.e., writing and painting, music and art, etc)? Can a person succeed at more than more, or does trying to do so dilute what they have to offer?

Yes, I think it’s certainly possible. But I see very few people who do it really really well. I do think certain art forms naturally fit together, such as poetry and music, or architecture and sculpture. There are aesthetics that are common to many art forms, so it’s not a big stretch to use the same ideas across platforms. Though part of me believes people should submit to one art form at some point in their life. I guess it’s like a relationship. There are monogamous people and then there are others. I’m more of a monogamist; it just feels right and wonderful and challenging everyday. Though some people may argue that creatively I’m polyamorous …

Do you believe some of the various attributes related to being highly creative have caused you aberrations in life, helped you deal with life's aberrations, or both?

As I said before, life’s “aberrations” often inspire me. I can’t help but think that creativity requires both constructive and destructive forces to make it really work.

Have you had to deal with people in your life failing to understand your creative personality, interests, or drive? If so, can you tell us about it and how you've dealt with it?

Umm, did I have people who failed to understand my creative personality? Yes, it was called my childhood. Parents are great but they are not always equipped to deal with everything. My mother understood my love of books and writing (she’s a big reader) but even she wanted me to be a lawyer or something. I was fortunate that there were strong people in my life who did “get” it. I simply gravitated to those individuals and listened to everything they had to say. They came up in some of the oddest places in my life. One was a debating coach who was such a character.  She was an odd person but so welcoming to my aspirations of being a writer or creative individual. She was probably one of the first people I met who seemed to embrace that notion so completely.

Unfortunately, many creative people never achieve the success they dream about. Which of your dreams have come to pass and what do you dream about now?

I have the freedom to write, which is a very big deal and I consider--a success. I often think about people who are persecuted for writing in countries where freedoms are limited or monitored. I lived in Beirut, Lebanon, for a year in the late 1990s and as free as the Lebanese are, there are taboos that aren’t written about in the media, it was shocking for me as someone who grew up in the West.

Other successes, well, I have become an art critic in New York City (which I dreamt about as a kid), I write what I please. I consider these all successes. In terms of the future, I would like to write more long form works.  I find my writing shines in long form. So, next up are books, novellas, short story collections, biographies … 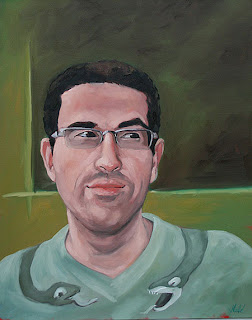 Is there a difference between being creative and being talented? What are your thoughts on this?

Talent is overrated. Even the most talented people have to work at developing it. You can always tell when someone’s talent is underdeveloped. Creativity is multifaceted, talent isn’t really. That’s just the way I see it.

What is your primary motto or mantra in life? Why is this important to you?

That’s a tough one. I don’t have a motto or mantra but I do believe in questioning everything, following your inspiration, and feeling things passionately. I’m sure my mantra is buried somewhere in between all these things.