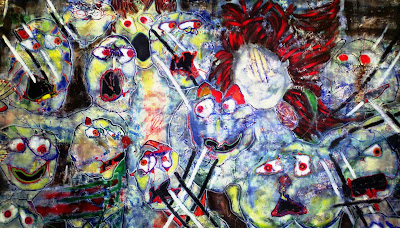 Untitled Work in Progress (detail)
4 x 6 feet
Acrylic on Canvas﻿
"An artist is a creature driven by demons."
-William Faulkner
Aberration Nation began focusing on aberrations, those crappy situations life throws at us, or that we create for ourselves.  One of the reasons I started the blog was my hope that reading about the difficulties other folks have overcome would show my mother that she is not alone.  I thought it could give her a weekly shot of inspiration.  Sadly, my mother never reads this blog.
Over the last few weeks I've been thinking a lot about my own aberrations.  Perhaps working on my current painting, a 4 x 6 foot piece that features a faceless woman surrounded by a band of colorful, bizarre demons has influenced me.  I've also been having some issues with my mother, whom I've frequently written about.  Meanwhile, I learned that my brother (age 46) will soon have open heart surgery at the Mayo Clinic to correct a rare life-threatening heart defect. 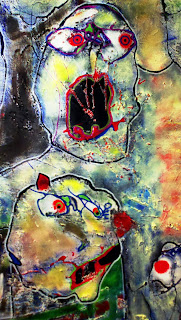 Needless to say, I spoke with my brother this week about his own issues and about our mother.  She is older now, and wants and needs support from us, including financial. She believes this is something we owe her.  Of course, it's a long story with multiple complexities that I can't explain in a blog post.  My brother and I seemed to hold hands in spirit as we talked on the phone, shaking our heads, trying to understand how we can possibly help the woman who has caused us so much pain, and who continues to bite the hands that would feed her.

I also learned over the last couple of weeks that a childhood friend of mine has a court order against her for spanking her child.  With this looming in my head, my brother mentioned an incident that triggered a surprisingly strong emotional reaction on my part. He reminded me how his ex-wife banned our mother from their home after she "spanked" their then 3-year-old son thirteen years ago.

"Well, it was bad enough that three days later he still had red slash marks from his heels to his neck.  She basically did to him what she used to do to us.  Make us go get a switch from the yard and then proceed to beat the living hell out of us with it."

Just as I was processing his words, he told me he had friends over; he had to go and we would talk more later. 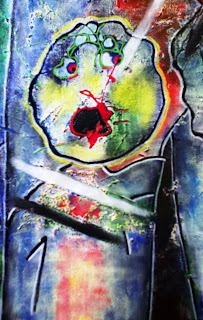 I was left with the sick realization that I'd been beaten rather than spanked. I thought about the time I was playing outside and she came out of the house like a bat out of hell calling my name.  I was terrified.  Being about eleven years old, I realized I had the power to attempt escape.  So I ran, which was uncharacteristic of me.  I ran and ran and ran, and she chased me.  All the neighborhood kids stood by watching the excitement.  I finally circled back around towards our house, ran in, and locked myself in the bathroom.  I remember cowering there crying, knowing that I would have to come out and that she would give me one of those horribly painful whippings.

I don't remember how many times it happened or what I did to deserve them.  It was certainly more than I can count on the fingers and toes they verified for her when I was born.  The last time it happened, I was fifteen.  I told my parents that I was driving to the local convenience store, but I actually went to a party in the neighborhood that I'd been told to stay away from.  I had a plan to go for 15 minutes.  After about 14 minutes, my mother was at the door in her nightgown, curlers in her hair, no makeup, crazed look in her eye.  She pushed through the crowd, grabbed me in a highly dramatic display of anger, and dragged me out while everyone laughed.  Some mean guys snickered and made inappropriate sexual comments about me just to fuel my mother's anger.  It broke my heart.  When we got home, she took my father's belt to me.  She held my arm in an attempt to keep me there, but I eventually broke loose and grabbed the belt.  I looked her in the eye and said, "If you hit me one more time, I will hit you back." 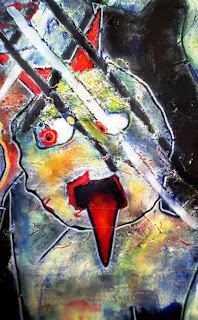 After talking to my brother, I got on the Internet to research the definition of physical child abuse.  I also asked my husband and 22-year-old daughter if they thought spanking a child hard enough to create painful red welts and bruising with an object while enraged is abuse. They both looked at me with the compassion one has for a wounded child and said, "Of course it is."

I've known that I was emotionally abused as a child and what that did to me, but I've always tried to forgive my mother.  After all, she has documented mental illnesses.  I've always felt deeply sorry for her, and have tried to help her in the ways that I knew how.

The realization that she truly beat the hell out of me and my brother is sobering.  Lately she pleads with us, especially me, to help her.  She views herself as a victim.  According to her, all her friends think I'm a terrible daughter because I don't help my wonderful mother enough. How much is enough?  In my adult life she has "cut me off" numerous times.  She has said horrific things about me and my family including that my children would be better off dead than to have me for a parent.  She constantly tells me that there is something wrong with me.  It goes on and on.

When does the nightmare end? 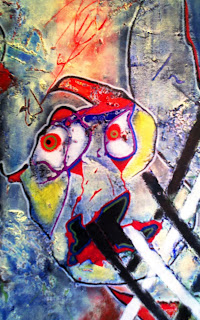 As she grows older and cannot fend for herself, is it I who must rescue her?  I'm a forgiving person; I've proven that again and again.  As I've painted this picture over the last couple of weeks, I've felt the demons of the past emerging once again.  Their faces express the emotion I've never been able to relay.  My face is blank because if I took them all into me and expressed their pain, horror, disbelief, sadness, and fury, I could not function.  But unlike my mother, I've never seen myself as a victim.  My goal was and is survival, pulling myself up and out.  Forging on, clinging to the belief that there is a purpose for my life.
And so I write and create art.  And if this faceless woman must see her elderly mother lying in the gutter with no help, yes, there will be more demons to bring along into my own twilight years.  I'm trying to be okay with that; after all, I'm used to having them around.  When I was a little girl jumping at the slashes of that vicious switch; having demons called out of me; being told that God said my father would die so that my mother could marry another; and hearing again and again that I was somehow defective and self-centered, my face grew blank as I told myself that someday I would be free.  Someday I would take it all and use it to create something beautiful and truthful, something that would show that I am not as blank as I appear. I am not selfish.  I am not filled with dirty, vile demons.  Like you, I am worthy of love.

In the process, I have come to love the faceless woman and her demon pack.  If anything, they are interesting. ﻿