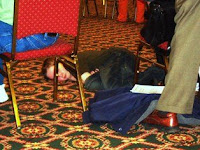 Earlier this year, I attended the Narcolepsy Network's mid-year conference in Albany, New York to provide support to the narcoleptic community and to promote my novel, Aberrations. A British film crew was on site following a group of their citizens suffering from narcolepsy. The outcome is a documentary called, Ninety Naps a Day, which will air on October 9th as part of a popular British television show called, Cutting Edge. Cutting Edge, Channel 4's flagship documentary series, provides distinctive, compelling films that offer a snapshot of modern life.

You can view clips from the upcoming documentary at the links above. My understanding from their Web site is that the full show can be viewed on line after October 9th. If you would like to learn more about narcolepsy, I hope you will take the time to watch this informative and heartwarming documentary.